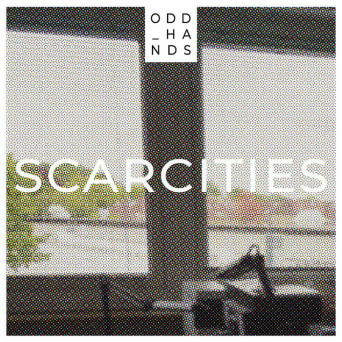 RICO PUESTEL enters the stage right as ODD HANDS with the eclectic and one-of-a-kind album SCARCITIES, produced between 2019 and 2020. Not being nearly sure about the actual reasons for coming up with the project name and album title at hand, the whole conceptual setup is based within the triviality of a small site office space that drifts into some kind of hallucinogen dreamscape triggered by the pureness of its own calculability, emerging into a multi-layered unpredictability. What happens next is something beyond words, only music manages to express once again…

A wildly polyrhythmic, shakily emotional and mind-bending ride through the realms of unbolting Electronica, Drum’N’Bass, Broken Beats, IDM, Experimental Techno and beyond stirs up mechanical structures melting with weirdly orchestrated fragments of instruments and vocals, melodies and harmonies – embedded into a surge of dense and saturated acoustics.

SCARCITIES is all about an overriding coherency that endures constant change of perception and perspective throughout its musical modules and components. Besides a sidechain bow towards the early works from Warp grounds, this album takes its agenda to a higher plane, creating a vigorously individual approach on sound design, aesthetics and storytelling.

This vast trip, reaching for the highest highs while digging right into an uncertain depth leaves you hanging in a multiplex of moments while ODD HANDS already exited stage left before it is and will be known what has actually happened here…